Karuna is a frozen mining town in Arctic Sweden. Amidst the iron ore and man-made mountains of spoil, we sat on our sleds waiting for a train, which was now five hours late. Everything here revolves around mining and this was the reason for our late train. A mining carriage took priority on the single track rail network and we had been waiting for it to pass, slowly watching the sun set over the black artificial mountain on the opposite side of the tracks. It was -10 degrees and we were well within the Arctic circle.

We waited, and finally the train came. 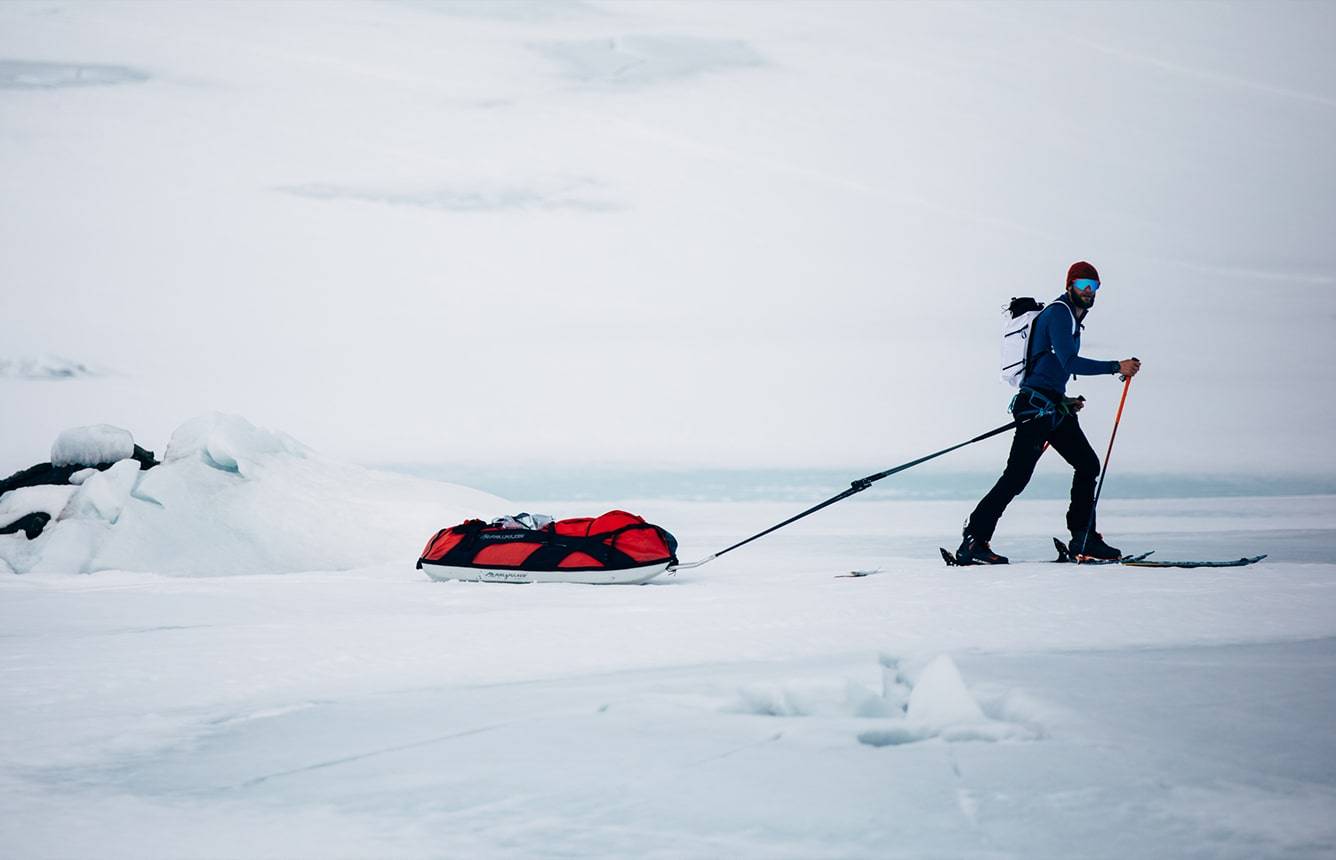 The human powered leg of the journey started at Kvikkjokk, in the Sarek National Park, where the King's Trail begins. That evening we covered as much ground as we could before setting up camp on the edge of the trail. We would have over 50km to travel to our base camp over the next couple of days.

The frozen lakes gave us quick and easy passage. Easy to navigate and flat, which meant we could almost turn off and go into autopilot, putting in the hard work without much thought. Later in the day, ponds would form on the surface then later refreeze, forming a thin layer of ice that would easily break. Occasionally we would break through these layers of ice, freeze with dread for a split second, before realizing there was still plenty of ice beneath our skis. Yet it was still enough of a shock to jolt me back to the ice breaking procedures, drilled into me in a previous life as a Royal Marine, during long winter deployments to Arctic Norway.

The scenery was much like a large-scale Scotland: rolling mountains, pine trees stretched as far as we could see. It was all very familiar, until we came across Skierfe. A huge granite outcrop with an opposing cliff on the other side of the valley. A huge 600m wall, with no resemblance to anything in the UK. Camp was set up on the edge of the frozen lake, next to a jetty that would serve as our kitchen. The jetty also served as a convenient dry and flat location to pack our BASE parachutes. 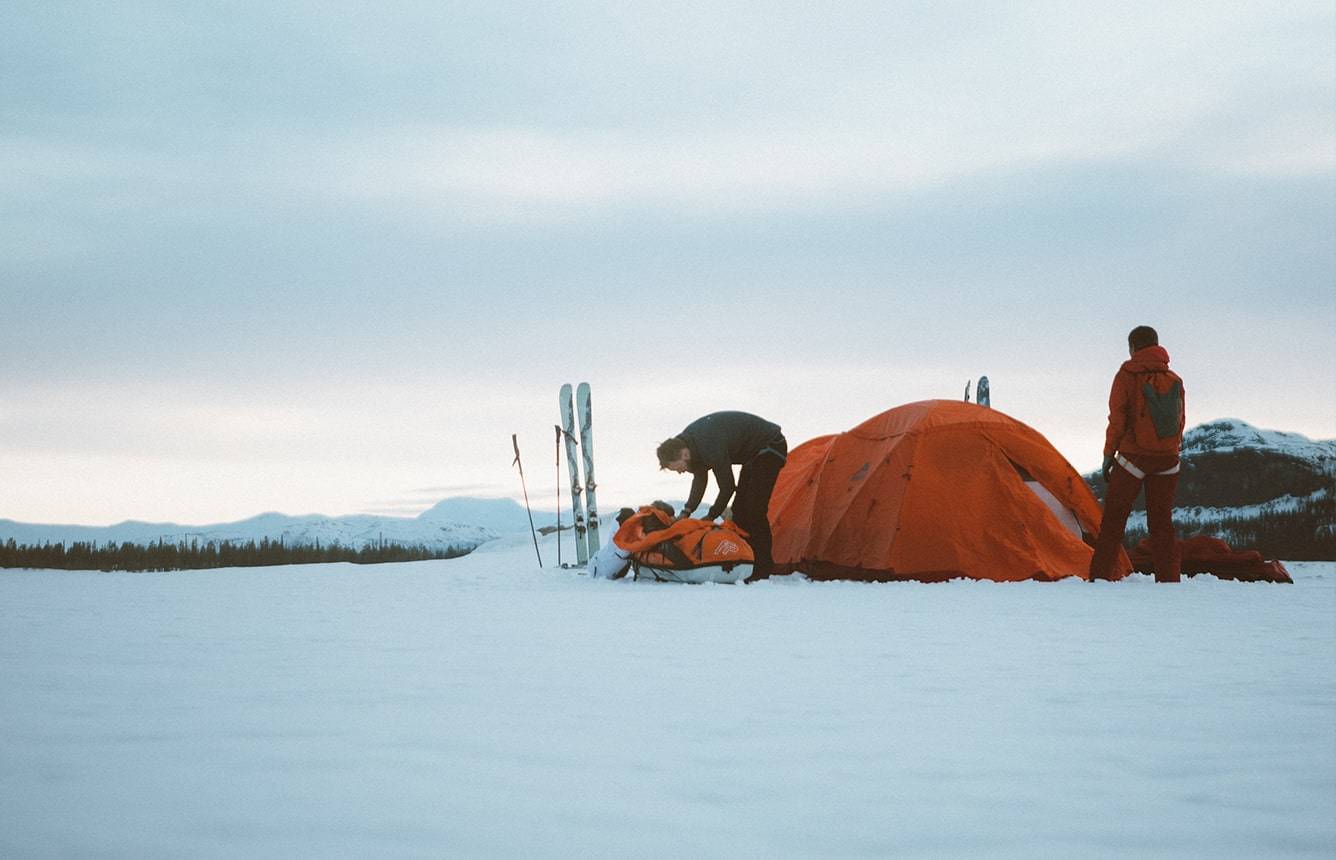 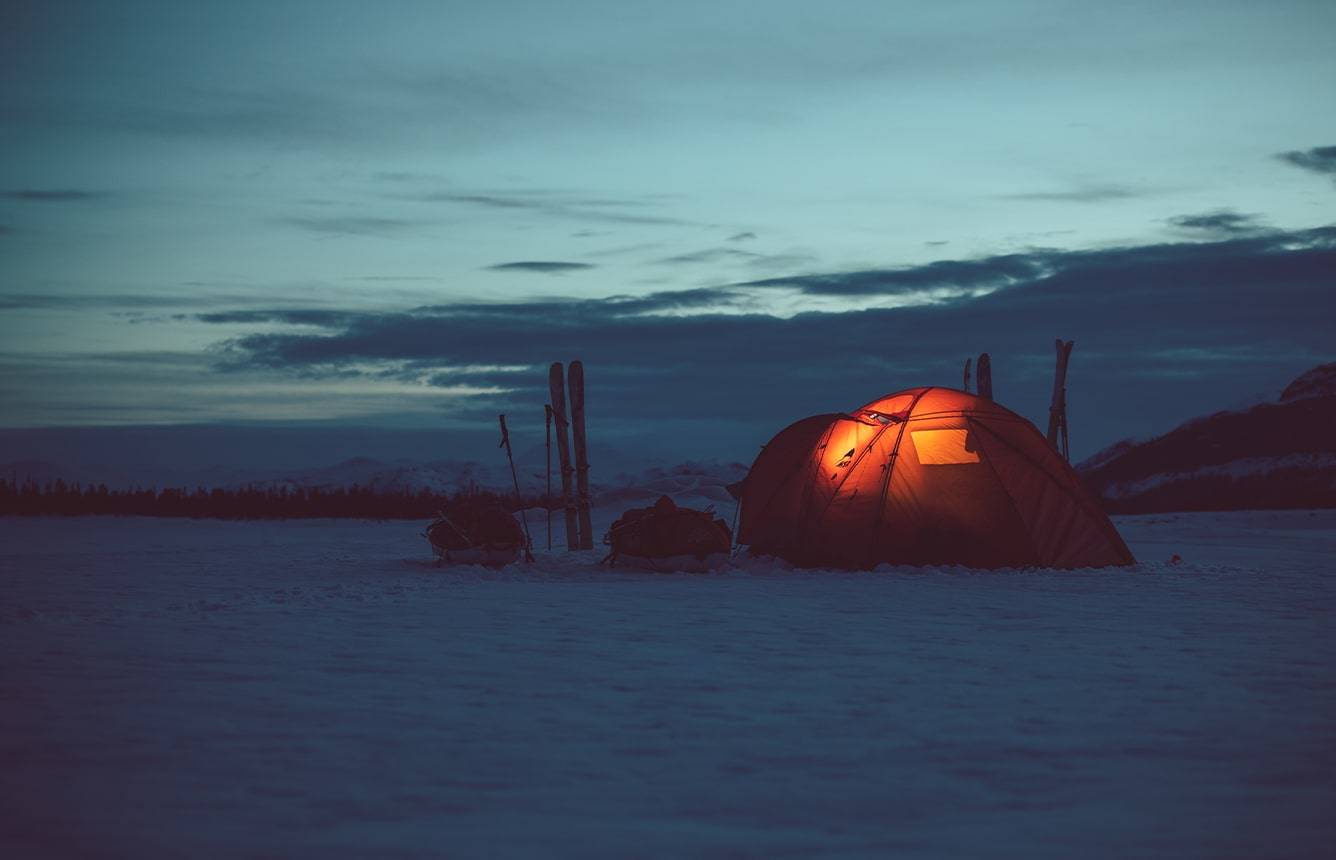 As always, our alarms go off early. An alpine start. The snow at this time should be firmer and it gives us maximum daylight to mitigate any unforeseen circumstances later in the day. We calculate a four-hour hike to the BASE exit point. Trudging through deep snow we carried on just a bit further, to the next tree, to the rock, to the ridge. Until we were too committed to turn back. Our boots were wet through, but we might as well continue. On the ridge we could see the summit, which was now cloaked in thick clouds. To warm up, we spend 30 minutes making a rock wall windbreak and within two minutes of sitting behind it, Ewan is asleep. Ewa put her cold feet in my armpits and tried to dry the socks in the wind.

We waited, and then finally the clouds lifted. 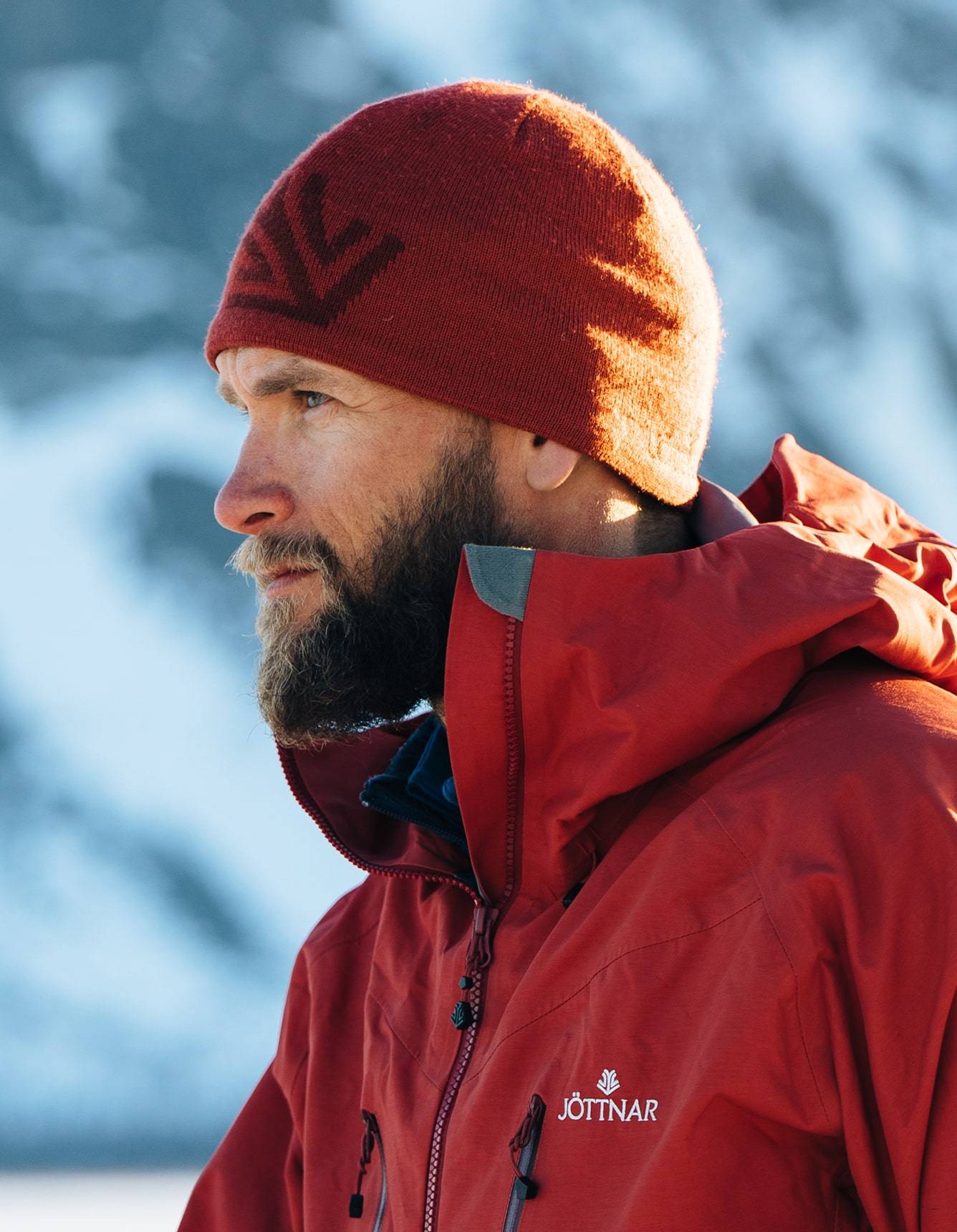 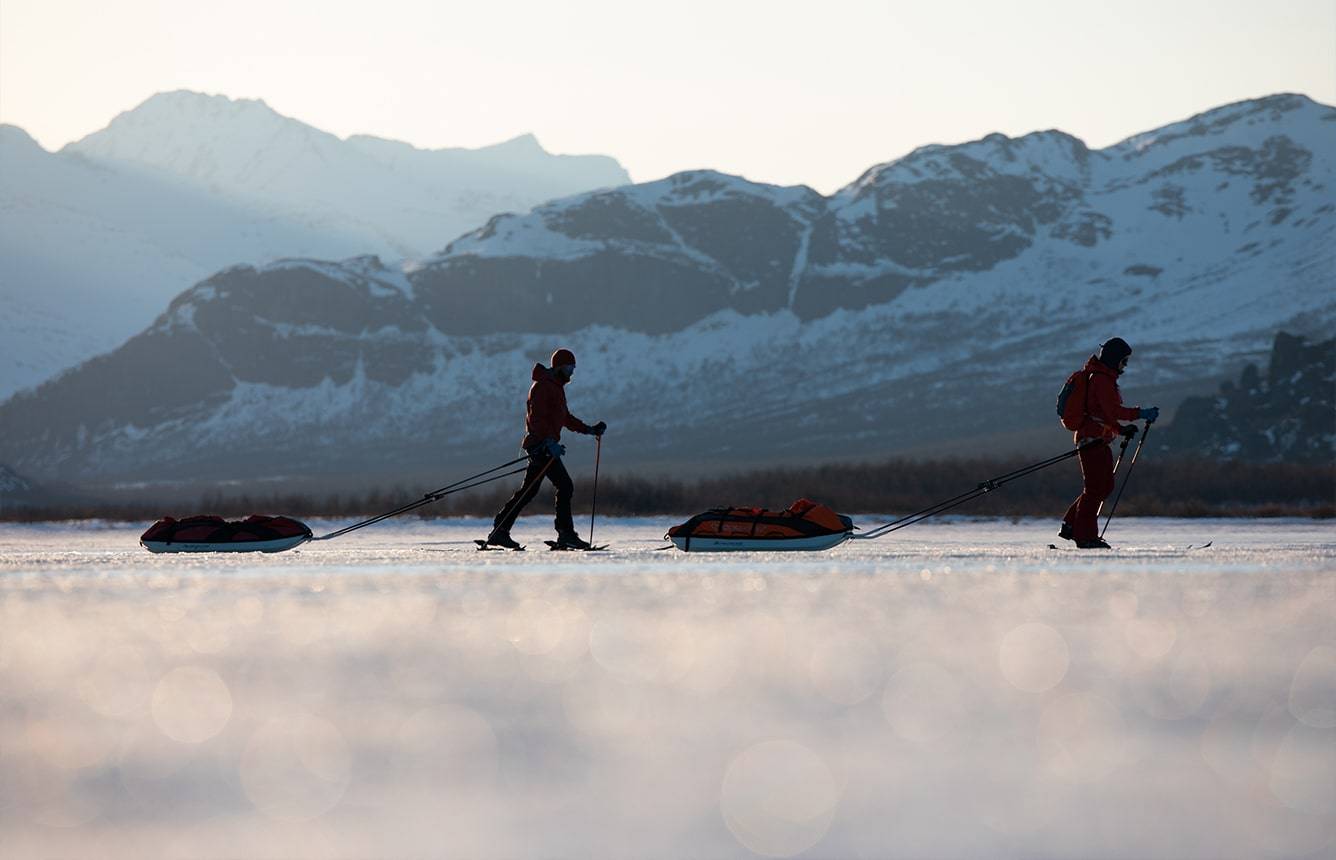 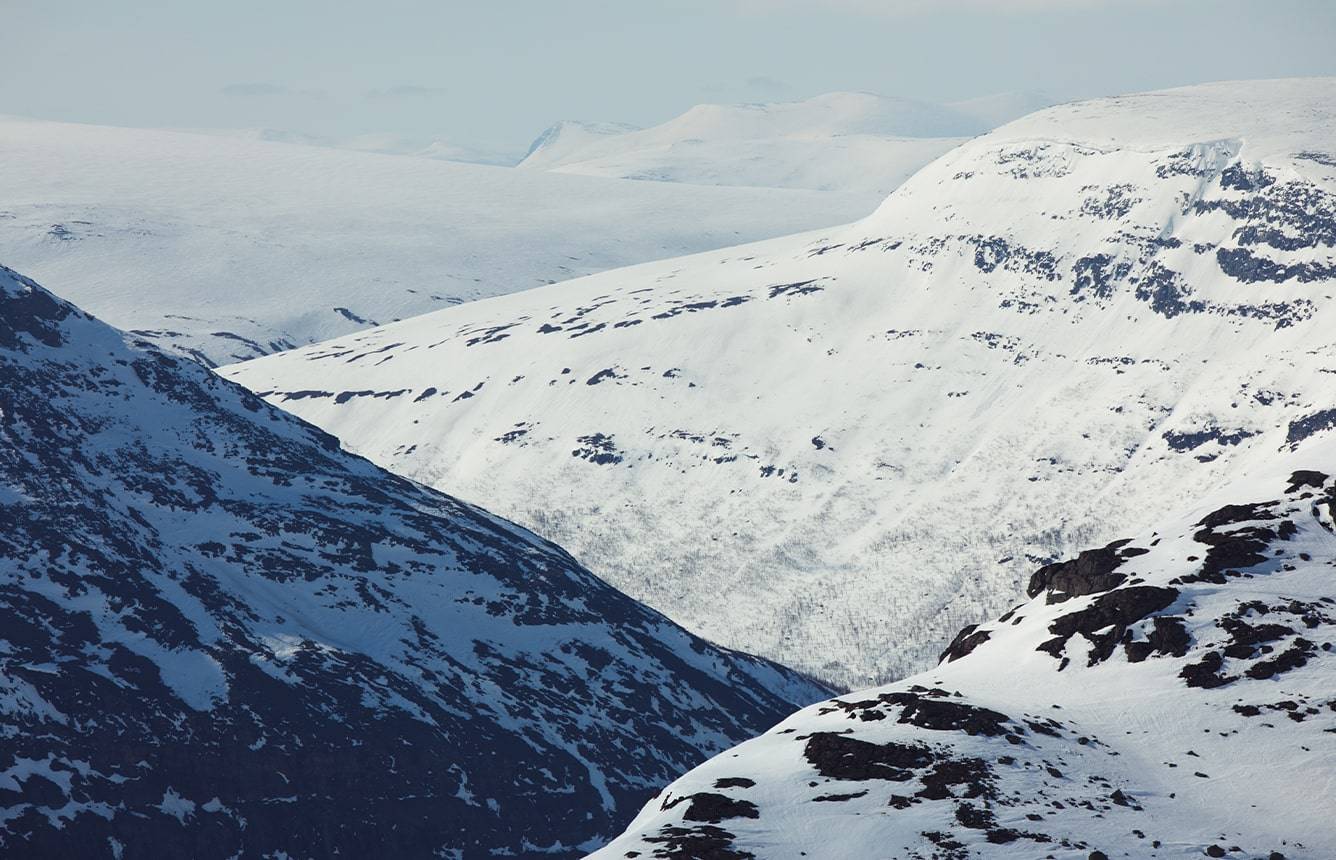 I’ve never put this much effort into a single jump before. Ewan had joined me on Mount Kenya last year to open the first wingsuit exit in the country. He now wondered why he’d joined me for this one, with its especially long and tough insertion. Now on the summit of Skierfe, 64km from our start point, I peered over the edge, finding an obvious exit point. The whole face was a sheer drop to the valley below. By now the sun had had plenty of time to heat up the black south-facing wall, and the thermal updraft would be helpful for inflating and pressurizing my wingsuit. But it would create unpredictable conditions for Ewa’s parachute to open so close to the wall. Fortunately we were not in a race against the sun. It’s light pretty much throughout the night and the longer we waited the calmer the air would be.

Ewa suggested I jump without her, but we had traveled so far with the aim of jumping together. It would feel incomplete if we didn’t manage to both jump. This exit wasn’t technical or challenging, it was more about the journey to get here and the incredible scenery. It was something to share.

From our carefully selected rock we shared body warmth and waited for a lull, staying geared up to grab the smallest opportunity presenting. We couldn’t feel the wind from where we were so I made a makeshift flag out of a compression sack and a walking pole, to hang over the edge of the cliff. It was another waiting game.

We waited, and finally the wind subsided.

The sun was only a couple of hours from setting, casting long shadows across the frozen delta below. The rock cooled and the air became calm, presenting us with a window of opportunity. Ewa stood on the exit, and then quickly leapt, knowing there might only be one chance. I held her bridle in my fingertips, enough to pop the pins holding her parachute in the container. At line stretch the canopy is now fully above her head, the bridle slides out of my fingers and the parachute near instantly pressurises, heading and flying away from the cliff. I knew seeing my wife jump would be more satisfying than my jump itself. Having made so much effort to get here, this was the moment we had been waiting for. 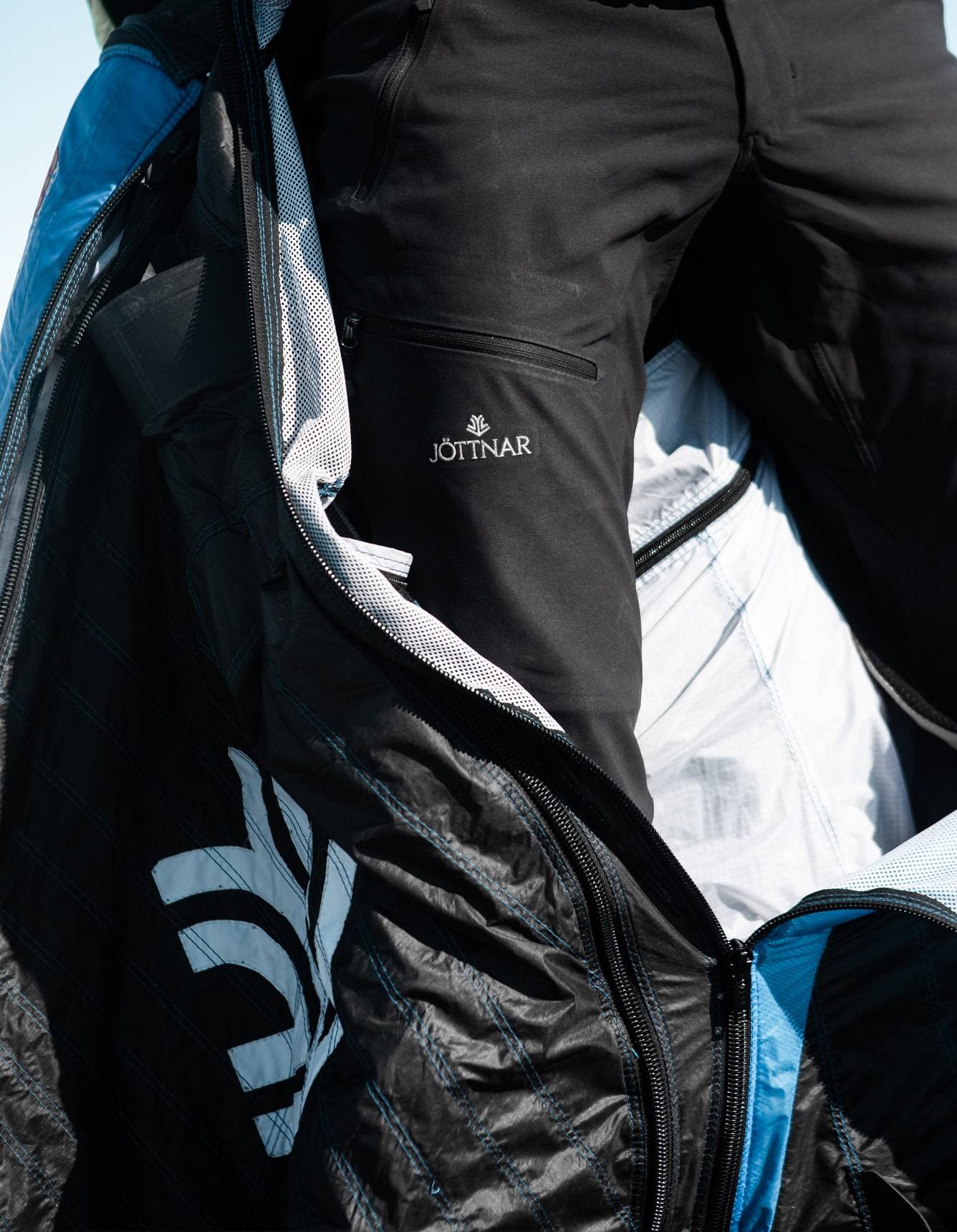 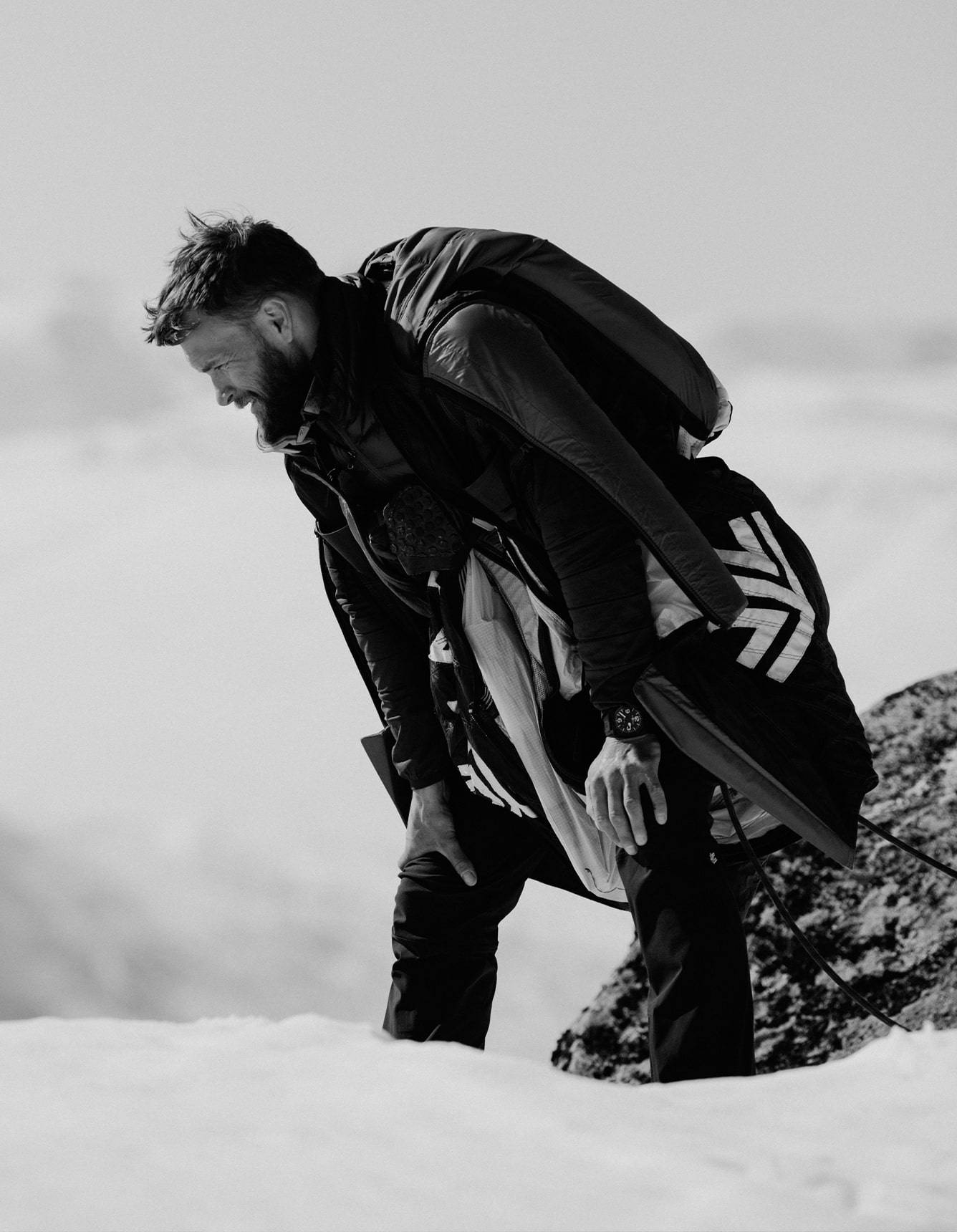 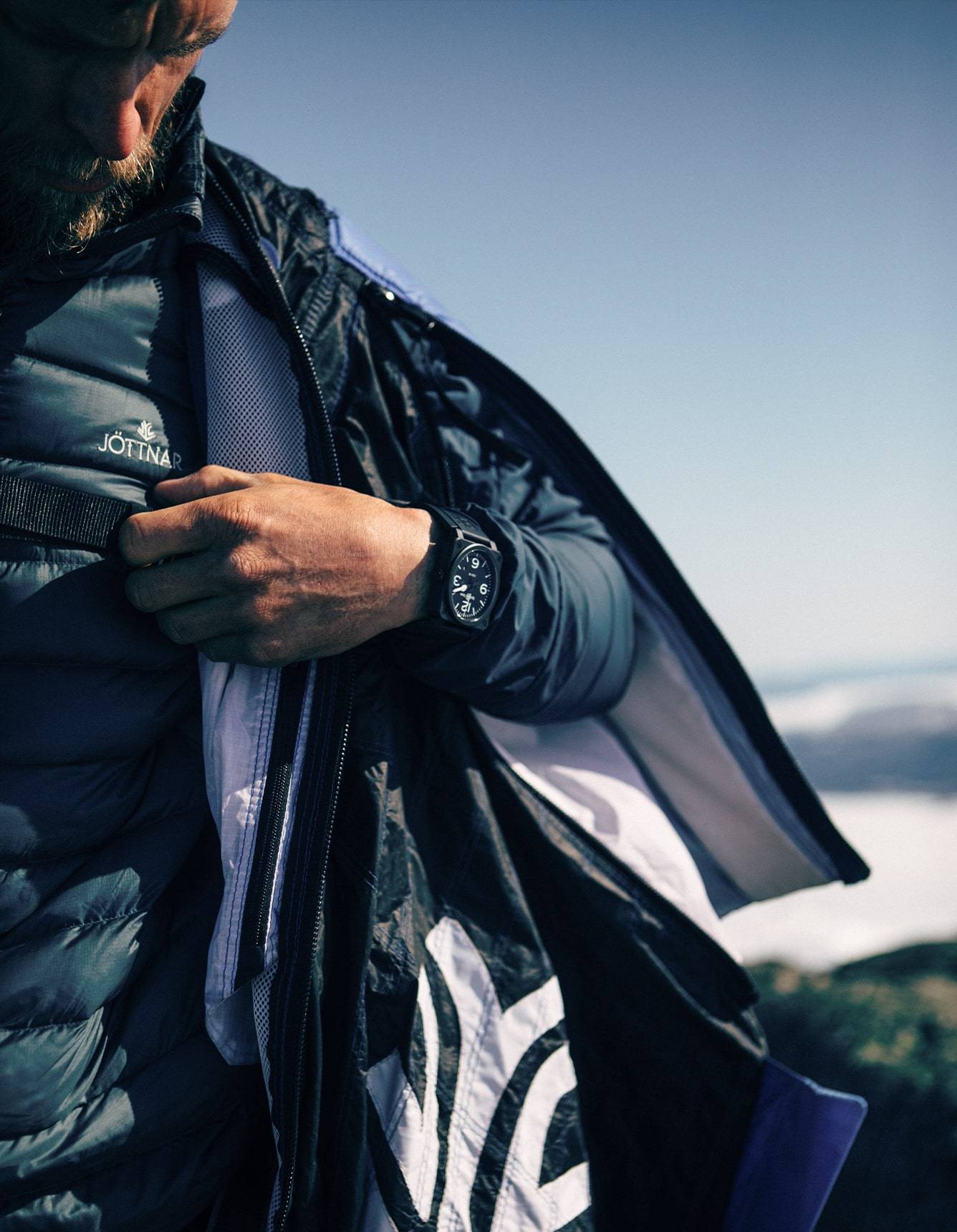 I want to take the same window of opportunity and as I zip the wings up on my wingsuit I shout to Ewan to radio Ewa and ask the wind direction. I walk over to my exit point but it seems the window has closed, the katabatic winds now fiercely whipping down the valley. I stay poised on the exit, my right foot in front of my left. The rock is grippy and I’m sure of my footing. Minutes pass as I stand here motionless in this stress position. The wind suddenly steadies and I jump. The cold air is dense, inflating my wingsuit and giving me good glide. I turn down the delta towards the lake, away from the setting sun. 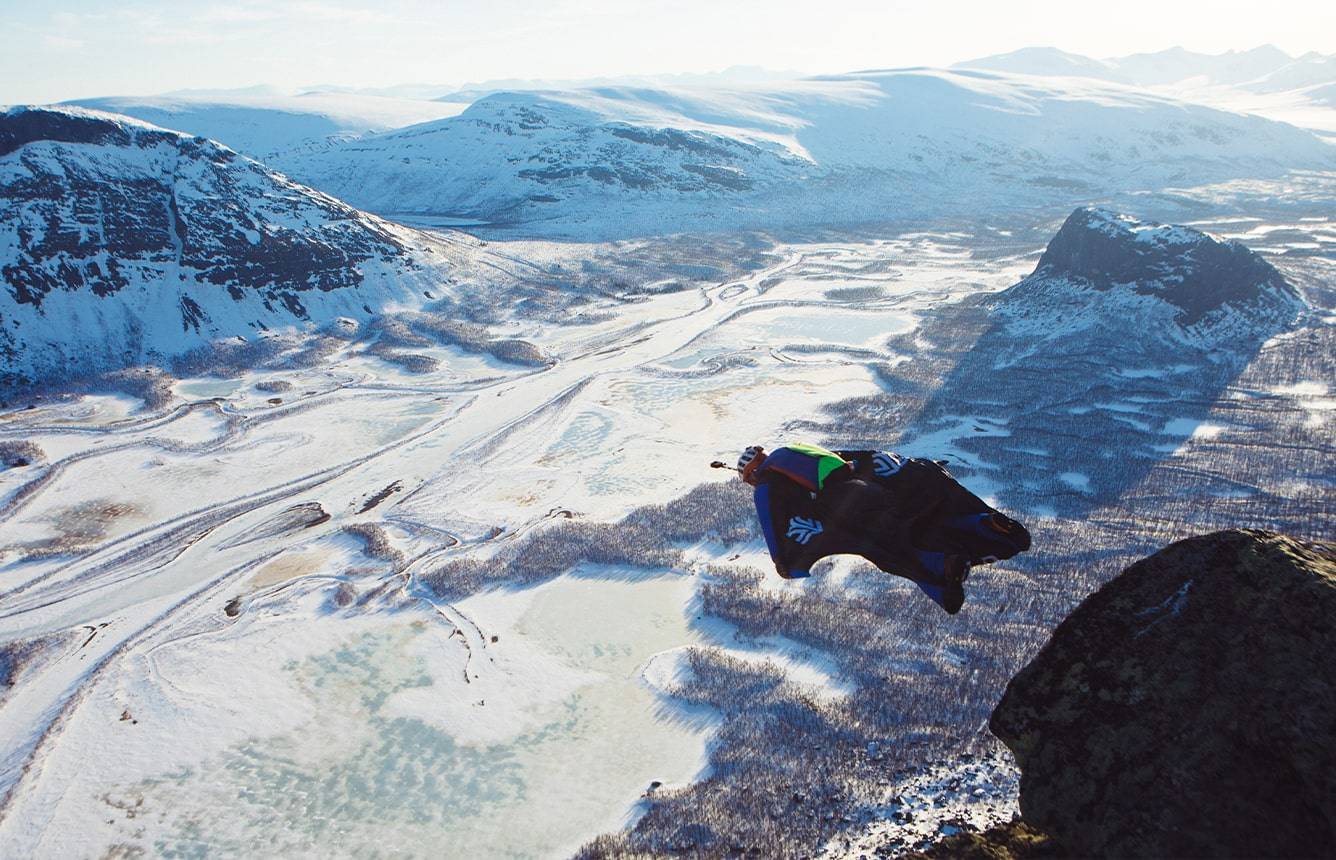 We flew as far as we could back to camp, as it would mean less trudging through wet snow. I landed on ice, hoping it would hold. Ewa shouted from within the woodblock. I followed her footprints on the frozen estuary until we embraced each other. Tracks of reindeer and wolverine littered the river banks back to base camp where we sat on the jetty boiling water for Ewan’s return.

We waited, and finally Ewan appeared.

The waiting game is just part of it, a small obstacle for the committed. Our Arctic persistence paid off.