Jöttnar Pro Team member Tim Howell is on a mission to climb and then BASE jump from all the six classic North Faces of the Alps. Here he describes the challenges of searching for a new exit point on the summit ridge of Piz Badile, which has never before been jumped.

Piz Badile (3308m in the Bergell range) was the only unknown in my North Base project. I was sure over the next two days the time and effort would pay off and we would be able to open a new jump on Piz Badile - a new “exit point”, but after the fifth hour of searching the summit ridge I began to doubt. I had climbed the North Face two years ago but no exit point existed. A few people had searched the mountain for a wingsuit exit but weren't content with what they found. A wingsuit exit needs a lot more specific criteria to be able to jump, compared to a BASE jump without a wingsuit. 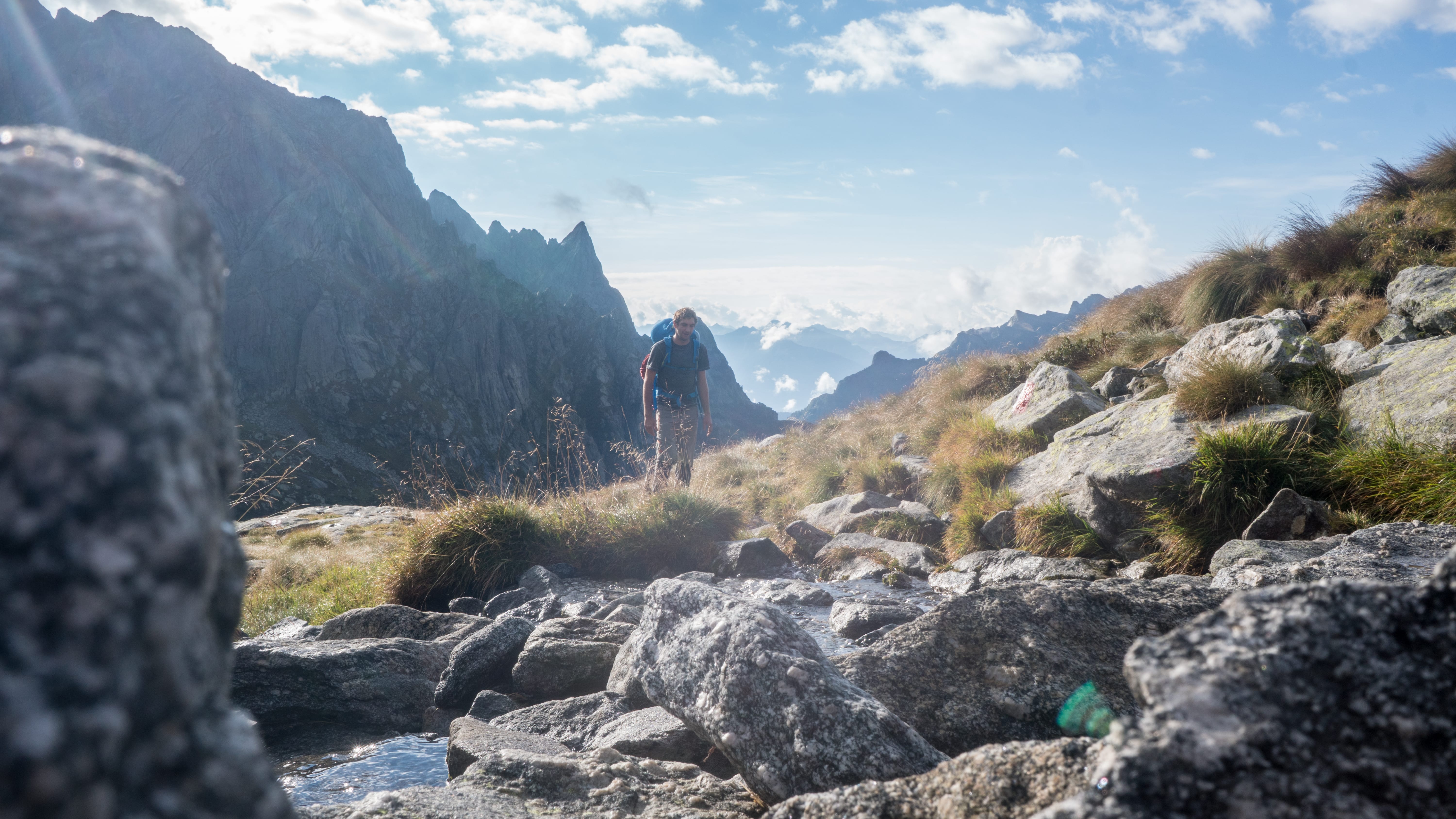 Ryan on the approach

I returned with Ryan to summit from the south side and find these exit points to BASE jump sans wingsuit. Jumping without a wingsuit would increase our likelihood of opening an exit, as we would be able to jump with a much shorter vertical drop then needed with a wingsuit.

Although Ryan has very little experience in the mountains I wanted him on this trip. His BASE jumping experience would be invaluable to us as we spent an hour sitting on the edge of a cliff calculating whether it would be possible or not.

We started from the car park at 5.30am. With each step I could tell the scale of the undertaking was beginning to sink in for Ryan. The sun rose as we past the forested section of the path, lighting up the golden grass and glacial streams as we filled our water bottles. Ryan was nervous about the climb but it started easily, and with experience he gained momentum, and with momentum he became conditioned to the exposure. We simul-climbed most of the route scrambling past familiar terrain I had abseiled down two years prior. It’s a varied route, mixed with wet chimneys, exposed ridges and slabs. It follows the path of least resistance marked by red dots. The sort of route if climbed a hundred times you would unlikely follow the same path more than once! We summited in good time, and already Ryan felt a huge accomplishment. I was hoping for another one soon. 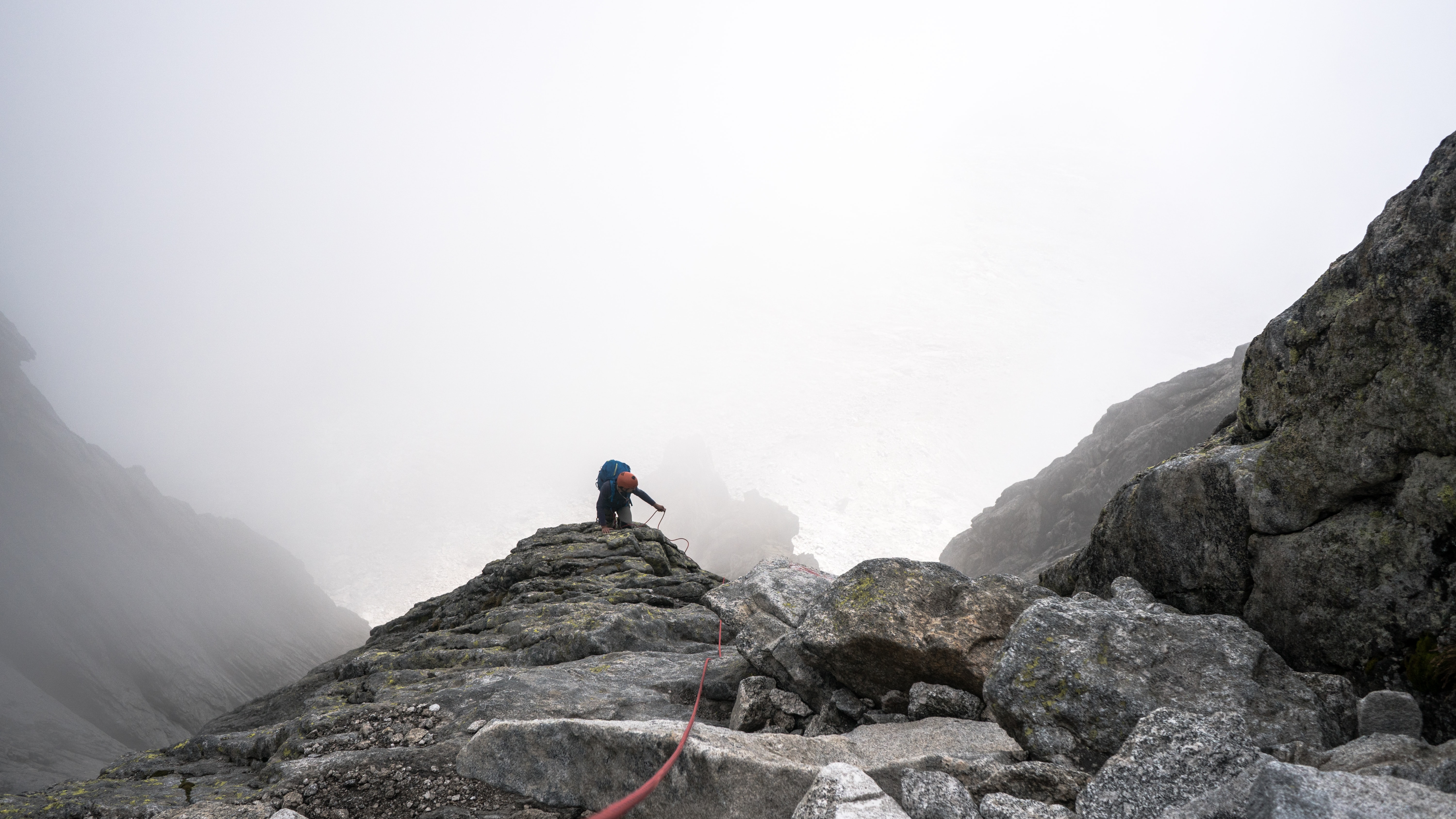 Climbing on the ridge 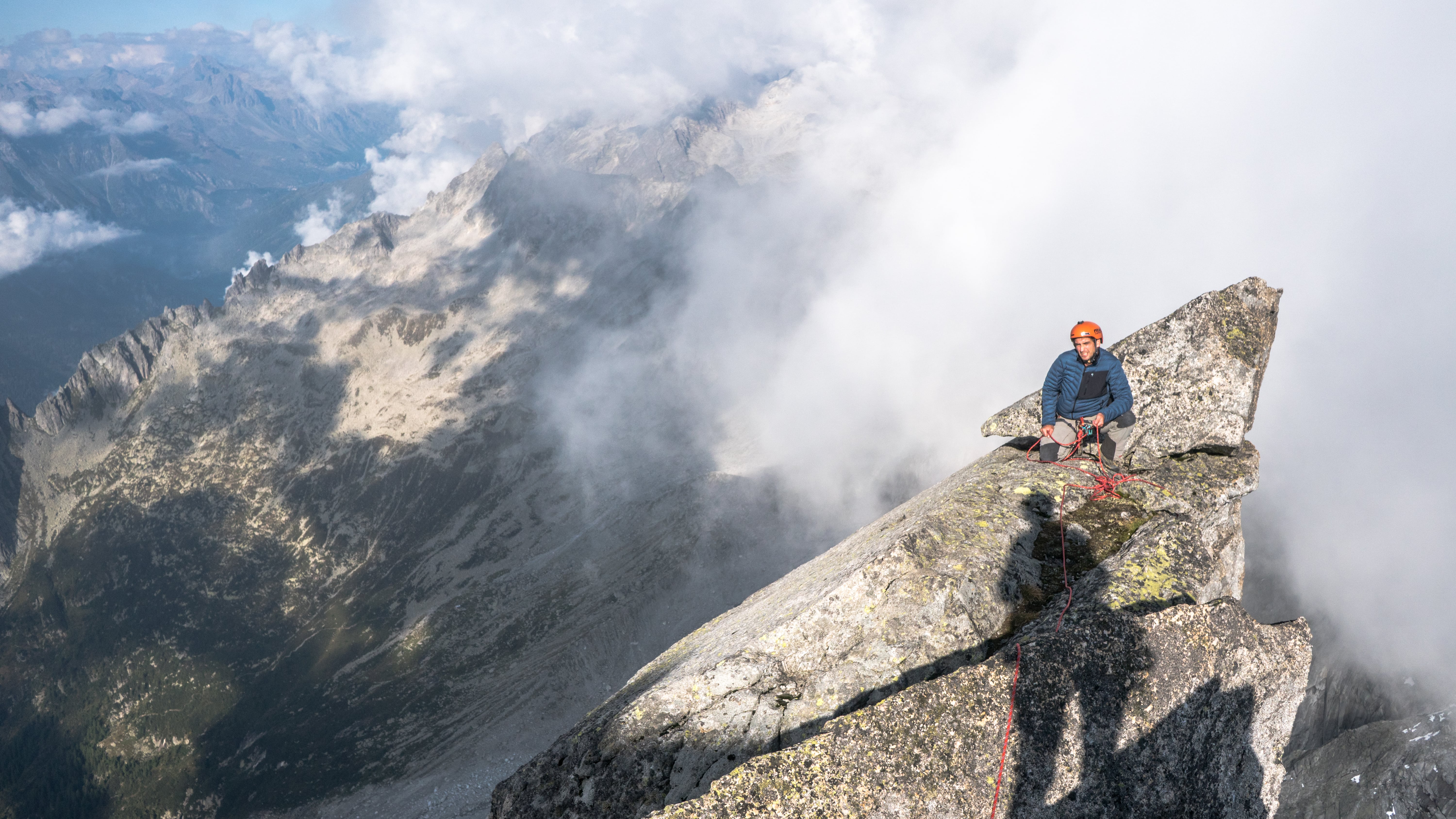 After searching for hours on the summit ridge our mindset had to change. We were not going to find the obvious and easy exit we wanted in these challenging conditions. Instead we would have to move our limitations of risk. It was hard to figure out in this scenario where we drew the line, how big we wanted our margin for error. We had to set apart our eagerness to get down quickly and effortlessly and my ambition to open an exit on Piz Badile and instead look at this exit purely from a technical point of view; the sole question came to us, it would be the deciding factor: ”would we do this jump on any other day, in any other location, without these factors influencing us?”

The skills and lessons learnt from previous jumps gave us shared experiences to calculate a demanding jump like this one. After an hour of deliberating, bouncing ideas, numbers and experience off each other, we decided to go. It took another 30 minutes to wait for the cloud to clear enough.

We would have to move our limitations of risk. It was hard to figure out in this scenario where we drew the line, how big we wanted our margin for error.

Ryan jumped first, if anything went wrong or I was left on the ridge unable to jump, my mountaineering knowledge would be more useful. Ryan launched from the granite pedestal. I was holding onto his bridle to open his parachute, a technique used to jump low objects. The wall wasn't vertical at all, but with a decent push we would have 34m of height to open and start flying the canopy. The updraft hit his canopy, inflating its cells. I took a final check at my static line setup and leapt off after Ryan. The walls to either side intimidating and the floor coming up closer than expected.

As soon as the canopy was open and flying away from the cliff, it was an instant relief. The margin for error felt big enough, all the calculations had paid off, and I was happy to say it wasn't too close for comfort. A jump that I would do again, if it wasn't for the huge amount of effort that went into it. It will probably never be jumped again, a one off, a tick in the box, to open the first exit on the Badile.

I was engulfed by the clouds, a disorientating and apprehensive few seconds. I knew the rock pillars were far away on either side of me and I was far above the ground, but flying blind was an intimidating experience.

I turned around the corner to see the clouds building up in front of me, Ryan's blue canopy disappearing into them. Soon I was engulfed by the clouds, a disorientating and apprehensive few seconds. I knew the rock pillars were far away on either side of me and I was far above the ground, but flying blind was an intimidating experience. I aimed for the fields with a lone shepherd’s hut just below the waterfalls, landing next to the bridge I had filled my water bottle at yesterday morning. Ryan and I were ecstatic.  We looked back at the summit of Piz Badile only to see it was completely engulfed by clouds, just like it was the day before. The mountain only gave us a small window to jump, and we were fortunate to take it. 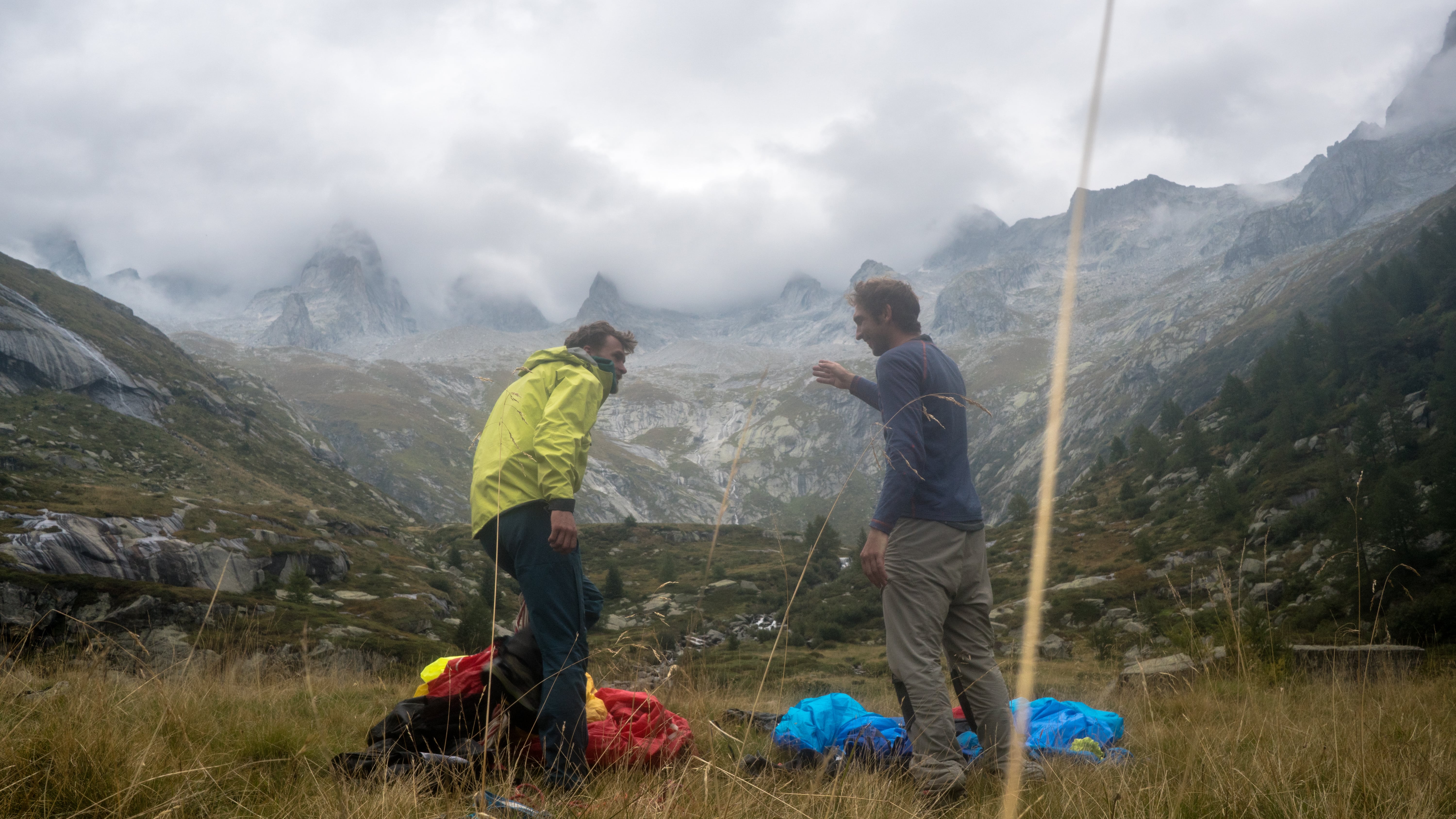 Tim is a member of the Jöttnar Pro Team. Read more about him here.